Eric D. Green, M.D., Ph.D., is the director of the National Human Genome Research Institute (NHGRI) at the National Institutes of Health (NIH), a position he has held since late 2009. Previously, he served as the NHGRI Scientific Director (2002-2009), chief of the NHGRI Genome Technology Branch (1996-2009), and director of the NIH Intramural Sequencing Center (1997-2009).

Born and raised in St. Louis, Missouri, Dr. Green comes from a scientific family. His father, Maurice Green, Ph.D., is a virologist at St. Louis University School of Medicine, where he has directed the Institute for Molecular Virology for over five decades. His brother, Michael Green, M.D., Ph.D., is a molecular biologist at the University of Massachusetts-Worcester, where he chairs the Department of Molecular, Cell, and Cancer Biology and is an Investigator of the Howard Hughes Medical Institute.

Dr. Green received his B.S. degree in bacteriology from the University of Wisconsin-Madison in 1981, and his M.D. and Ph.D. degrees from Washington University in 1987. During residency training in clinical pathology (laboratory medicine), he worked in the laboratory of Dr. Maynard Olson, where he launched his career in genomics research. In 1992, he was appointed Assistant Professor of Pathology and Genetics as well as a co-investigator in the Human Genome Center at Washington University. In 1994, he joined the newly established Intramural Research Program of the National Center for Human Genome Research, later renamed the National Human Genome Research Institute.

Honors given to Dr. Green include a Helen Hay Whitney Postdoctoral Research Fellowship (1989-1990), a Lucille P. Markey Scholar Award in Biomedical Science (1990-1994), induction into the American Society for Clinical Investigation (2002), an Alumni Achievement Award from Washington University School of Medicine (2005), induction into the Association of American Physicians (2007), a Distinguished Alumni Award from Washington University (2010), the Cotlove Lectureship Award from the Academy of Clinical Laboratory Physicians and Scientists (2011), a Ladue Horton Watkins High School Distinguished Alumni Award (2012), and the Wallace H. Coulter Lectureship Award from the American Association for Clinical Chemistry (2012). He is a founding editor of the journal Genome Research(1995-present) and a series editor for Genome Analysis: A Laboratory Manual (1994-1998), both published by Cold Spring Harbor Laboratory Press. He is also co-editor of the Annual Review of Genomics and Human Genetics (since 2005). Dr. Green has authored and co-authored over 340 scientific publications.

While directing an independent research program for almost two decades, Dr. Green was at the forefront of efforts to map, sequence and understand eukaryotic genomes. His work included significant, start-to-finish involvement in the Human Genome Project. These efforts eventually blossomed into a highly productive program in comparative genomics that provided important insights about genome structure, function and evolution. His laboratory also identified and characterized several human disease genes, including those implicated in certain forms of hereditary deafness, vascular disease and inherited peripheral neuropathy.

As director of NHGRI, Dr. Green is responsible for providing overall leadership of the institute’s research portfolio and other initiatives. In 2011, he led NHGRI to the completion of a strategic planning process that yielded a new vision for the future of genomics research, entitled Charting a course for genomic medicine from base pairs to bedside

(Nature, 470:204-213, 2011). Since that time, he has led the institute in broadening its research mission; this has included designing and launching a number of major programs to accelerate the application of genomics to medical care. With the rapidly expanding scope of genomics, his leadership efforts have also involved significant coordination with multiple components of the NIH, as well as other agencies and organizations.

Beyond NHGRI-specific programs, Dr. Green has also played an instrumental leadership role in the development of a number of high-profile efforts relevant to genomics, including the Smithsonian-NHGRI exhibition Genome: Unlocking Life’s Code, the NIH Big Data to Knowledge (BD2K) program, the NIH Genomic Data Sharing Policy, and the U.S. Precision Medicine Initiative. 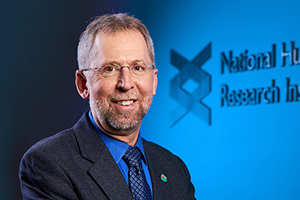 Eric D. Green, M.D., Ph.D., is the director of the National Human Genome Research Institute (NHGRI) at the National Institutes of Health (NIH), a position he has held since late 2009.
Do you like it?
Read more

Dr. Jennifer L. Troyer joined the National Human Genome Research Institute as a program director in 2013. Her main responsibility is as part of the team administering H3Africa
Do you like it?
Read more

Grants Management Specialist
Do you like it?
Read more

Dr. Ken Wiley joined the Division of Genomic Medicine (DGM) as a program director in 2014. He is responsible for managing a portfolio of extramural grants and contracts related to pharmacogenomics
Do you like it?
Read more

Program Director at Genotype-Tissue Expression Project (GTEx) Division of Genomic Medicine
Do you like it?
Read more

Dr. Madden is a program director in the Division of Genomic Medicine, National Human Genome Research Institute (NHGRI). Prior to joining NHGRI, she served as a research geneticist
Do you like it?
Read more

Collaborative African Genomics NetworkDay 1 of the 14th H3Africa Consortium meeting. We begin with community engagement workshop. What is research without our communities, how much do we engage our communities,? ... See MoreSee Less

CPGR - The Centre for Proteomic and Genomic Research