Professor Ramesar is Head of the Division of Human Genetics and Director of the Medical Research Council Human Genetics Research Unit at the University of Cape Town (UCT), Cape Town, South Africa, and its Allied Hospitals (Groote Schuur and Red Cross Children’s Hospitals). His work as Director of the Cancer Association of South Africa’s National Colorectal Cancer Research Consortium involves translating sophisticated molecular genetic research for application to rural and indigenous communities. Professor Ramesar was awarded the UCT Vice-Chancellor’s Alan Pifer Award (2009) for his research in this regard. He serves on the Executive Committee of the African Society for Human Genetics, the International Federation of Human Genetic Societies, and the editorial boards of several international journals. Professor Ramesar’s expertise is in the areas of mapping and identification of disease genes, genetic testing and counseling, phenotype/endophenotype/genotype correlation, and characterizing and cataloging genomic variations.

Professor Ramesar’s interest is in using the exciting developments in the field of genomic sciences to investigate human biodiversity. South Africa offers the opportunity to use population lineages in all of their richness toward identifying aspects of human biology related to both health and disease. In his current positions at the UCT, the emphasis of his research is on disease susceptibility in South African populations, progressing from commonly recognized inherited diseases to those that are more complex yet more common and relevant to the large disease burden. In this regard, Professor Ramesar’s most recent research enterprise is embodied in the large-scale project “Human Diversity and Health.” The richness of human population biodiversity has led to his latest quest to establish the research program “Heritage,” which crosses all academic boundaries and celebrates human origins and diversity (lineages, cultures, languages) and aims to identify those genomic fragments that predispose humans to disease. This quest will contribute to a more proactive and preventive approach to health. Tied closely to this quest is the expansion of research to cover genome-wide investigations pertaining to the burden of disease in Southern Africa and linkage with the “essential drugs list” (national drug formulary) and the relevant pharmacogenomically related-variants in the indigenous populations of Africa. As Director of the National Colorectal Cancer Research Consortium, his focus has been on the genetics of familial colorectal cancers and the most effective translation of laboratory findings to the field for the optimal benefit of patients and their relatives.

Professor Ramesar’s wife Jenny has a Ph.D. in medical virology, and they have two sons — Varish (18) and Nikesh (16) — and a daughter, Orissa (12). His non-academic pursuits include bonsai and painting (in watercolors and acrylics).

Professor of Bioethics and Anthropology, Co-Director of the Center for Genetic Research Ethics and Law in the Department of Bioethics at Case Western
Do you like it?
Read more

Associate Professor of Bioinformatics and Computational Biology, Department of Biostatistics, Harvard School of Public Health
Do you like it?
Read more

Dr. Cooper is a cardiovascular epidemiologist with a long-term interest in hypertension and related conditions in populations of African origin. He received training in
Do you like it?
Read more

Michèle Ramsay, Ph.D., is a professor in the Division of Human Genetics at the National Health Laboratory Service and University of the Witwatersrand (Wits) in Johannesburg
Do you like it?
Read more 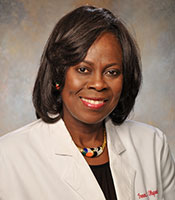 Dr. Clement Adebamowo is director of Strategic Information, Research and Training at the Institute of Human Virology, Nigeria; associate professor of
Do you like it?
Read more

Dr. Abdelhak is principal biologist at the Institut Pasteur de Tunis, head of a research unit on orphan genetic diseases, and is mainly involved in the study of the
Do you like it?
Read more

Robert Turner Professor of Diabetes, University of Oxford;Chairman and Head of the Oxford Centre for Diabetes Endocrinology and Metabolism
Do you like it?
Read more
Load more

Human Heredity and Health in AfricaFollow

The winner of the 2020 Global Goalkeeper award has been announced: @JNkengasong 🏆

Since the beginning of the #COVID19 pandemic, he has been a central voice for Africa’s scientific community. Find out more about his work below 👇

The fourth Phase 3 clinical trial for a #COVID19 vaccine has begun! Ad.26.COV2.S, developed by @JanssenUS & with trial co-funded by #NIH @NIAIDNews is a single dose vaccine. Enrollment diversity is crucial. Learn more about the trial: https://bit.ly/3hXW4fb

Did you know that @acegid’s #MSc and #PhD programmes in Molecular Biology and Genomics have international accreditation from the Agency for Quality Assurance through Accreditation of Study Programs (AQAS)?

Professor Ambroise Wonkam, the director of GeneMAP, had an interview regarding the modifiers of #SickleCellDisease on #SAfmSunrise yesterday. Please give it a listen at: https://iono.fm/e/928311

Great opportunity to present this at #GHIF2020 a decision pathway tool for feeding back genetic results to research participants @GA4GH @H3Africa https://twitter.com/cafgen1/status/1308744508922900482

The deadline for #AFRIBOP 2020 is fast approaching. Send in you applications and spread the word!